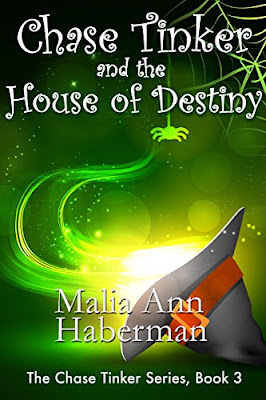 For eight agonizing months Chase Tinker's guilt over the despicable act he committed on Halloween night has been eating away at his heart and mind. His life gets even more complicated when secrets about the ancient Relic in the attic are revealed, right before an unwelcome caller arrives on Chase's birthday.

Despite these problems, his biggest concern is that his family's Dark Enemy, the Marlowe Family, is becoming more powerful with each passing day, fueled by the magic they continue to pillage from the many magical beings in the world. If Chase and his family are ever going to win, they'll need a whole lot of magical help. They must destroy the most evil threat the world has ever known.

Chase Tinker and the House of Destiny by Malia Ann Haberman
My rating: 5 of 5 stars

This is the third book in The Chase Tinker series. I absolutely loved it!

Chase Tinker is a wonderful character and I really liked him from the first time I met him in the first book. I have enjoyed watching his development from a frustrated teen into someone who I would be proud to know.

In this third book, which is told mostly from Chase's point of view though other characters also have their say, Chase is still having to deal with new magical powers that he struggles to control. Not only that, the Marlowe's are still intent on finding the Relic hidden in the attic of the Tinker house. But now one of their own has turned on them too, leading the Tinkers to find assistance from other magical beings. However, there's a problem. The Marlowe's are stealing all the magic and if Chase and his family don't stop them, all will be lost. Can they stop them before it's too late?

This is a wonderful story full of adventure, danger and mystery, and I found myself sitting on the edge of my seat as Chase, Andy, Nori and Persephone face danger once more. There are several twists and turns that keep a reader guessing. I found myself on a roller coaster of emotion from beginning to end. The story is full of imaginative prose that guides the reader in such a way that it runs like a movie in the mind's eye and is easy to picture. I love the way the secrets of the house were revealed and what it means to be a Tinker. I also love the way the characters' grow and develop throughout this series. This book doesn't end with a cliffhanger, but it still left me looking forward to reading the last book in the series, Chase Tinker and the House of Mist, as soon as possible. Though I am dreading it too, as I don't want the series to end.

Malia Ann Haberman has written a entertaining and exciting story for middle grade children. I love her writing style, which is fast paced and imaginative. The flow is wonderful too. I would definitely read more of her books in the future.

From the moment I learned to read, I loved it. I spent all my spare time reading one book after the other. One day, when I was about eight years old, my dad decided I was spending way too much time with my nose in a book. He wanted me to go out and play, like the rest of my siblings. I didn't want to do that. I wanted to see what other thrilling adventures those book characters could get into. So I sat outside on the porch and cried my heart out. Finally my dad decided he'd had enough of that noise and he sent me back into the house. I was happy again.

Years later, I'm still staying inside with books, but now I'm happily writing my own. :)