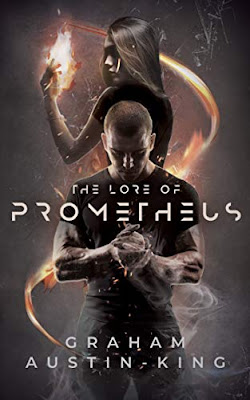 John Carver has three rules: Don't drink in the daytime, don't gamble when the luck has gone, and don't talk to the dead people who come to visit.

It has been almost five years since the incident in Kabul. Since the magic stirred within him and the stories began. Fleeing the army, running from the whispers, the guilt, and the fear he was losing his mind, Carver fell into addiction, dragging himself through life one day at a time.

Desperation has pulled him back to Afghanistan, back to the heat, the dust, and the truth he worked so hard to avoid. But there are others, obsessed with power and forbidden magics, who will stop at nothing to learn the truth of his gifts. Abducted and chained, Carver must break more than his own rules if he is to harness this power and survive.

The Lore of Prometheus by Graham Austin-King
My rating: 5 of 5 stars

This story is a fantastic mix of action, danger and magic. I loved it!

John Carver is an ex-soldier and war veteran. I liked this man a lot. He's someone you want watching your back, but he's seen and done things most civilians don't experience. He's faced danger and sacrificed much to protect others. When his squad was killed in Kabul five years before, his life changed forever. Some call it PTSD, others call it crazy, but John's also known to some as The Miracle of Kabul. To find out why you'll need to read the book. In dire need of funds, he finds himself headed back to Afghanistan as a security consultant. But things are not so simple, and as danger threatens, he will have to embrace his inner power once more.

Mackenzie Cartwright is a nurse working in Kabul, kidnapped while heading home after a shift at the local hospital. I liked her a lot too. She has an inner strength that shines through, even when dealing with her capture and subsequent torture.

This story is not for the faint-hearted and told through John's and Mackenzie's point of view. I was riveted to the story from the first page and didn't put it down until I finished it. Having read Faithless in 2017, I was expecting a dark, atmospheric tale, and that's what I got, though it was a little less claustrophobic since its set in a desert rather than an underground mine. I could tell a lot of research had gone into the writing of this book, from the military-speak to the weapons used, and everything in between. None of the violence is gratuitous in any way; it only enhances the realistic feel to the story.

Both John and Mackenzie go through hell, so there's little wonder their psyche becomes fractured. I think it was Lewis Caroll, who's character, The Cheshire Cat, said (and I'm paraphrasing here), "We're all a little insane here." What is reality? What is normal? The author explores this concept and adds a twist to it. We know only a fraction of what the brain is capable of, so who's to say that there's no potential for our minds to evolve to use capabilities such as ESP, telekinesis and other paranormal activity. It would be interesting to find out. But it could be several decades, if not a few hundred years before the human mind is understood enough to know if these powers are latent within everyone. Or if it's our perception of the world around us that creates our reality. I find it intriguing.

There is a lot of action, particularly towards the middle and end of the book, that had me sitting on the edge of my seat. By the time I reached the end of the book, I felt breathless and was left wanting more. I don't know if the author intends to turn this into a series, but I would be interested to see what John and Mackenzie are capable of together in the future.

Graham Austin-King has written an exciting, dark military fiction novel that kept me turning the pages. This book is superb! I think that this book is a lot stronger than The Riven Wyrde Saga and shows this author's growth in confidence as a writer. I love his fast-paced writing style, and the story flowed wonderfully from beginning to end. The characters came alive on the page and felt remarkably lifelike.

Although there is mention of sex, it’s not explicitly shown. Nevertheless, I do not recommend this book to young children or those of a nervous disposition, as there are scenes of violence and gore (battle scenes amongst others) that could be very disturbing to some readers. However, I highly recommend this book to older teens and adults alike if you love dark thrillers, military fiction, and/or paranormal fantasy stories that have an X-Men feel to them. - Lynn Worton 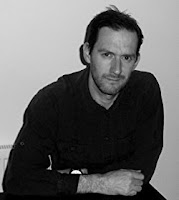 Graham Austin-King was born in the south of England and weaned on broken swords and half-forgotten spells. A shortage of these forced him to consume fantasy novels at an ever-increasing rate, turning to computers and tabletop gaming between meals.

He experimented with writing at the beginning of an education that meandered through journalism, international relations, and law. To this day he is committed to never allowing those first efforts to reach public eyes.

After living in the north of England and Canada he settled once again in the south surrounded by a seemingly endless horde of children and a very patient wife who can arguably say her husband is away with the faeries.

Fae - The Wild Hunt is his first completed novel and draws on a foundation of literary influences ranging from David Eddings to Dean Koontz.

Visit his blog at http://grahamak.blogspot.co.uk where you can sign up for e-mail updates and be the first to hear about new releases.

Find Graham on facebook at http://on.fb.me/1pMyWmK He loves to chat with readers.

What others are saying about Graham's books:

"The action is great, the suspense is well done and the Fae are truly scary." - Leanne Ellis, Bloody Cake News

"...If you like fantasy books which you can really get stuck into then this one is for you!" - Bodicia, A Woman's Wisdom Blog

"...This is a fantastic fantasy! I loved it!" - Lynn Worton, Book Reviews by Lynn.

Amazon Author Page
Posted by Lynn Worton at 02:00 No comments: 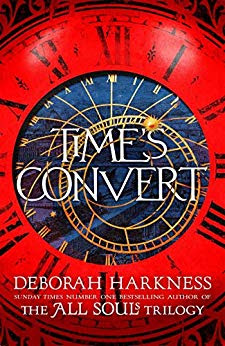 From human to vampire ...

Marcus Whitmore was made a vampire in the eighteenth century. Over two hundred years later, he finds himself in love with Phoebe Taylor, a human who decides to become a vampire herself.

But her transformation will prove as challenging now as it was for Marcus when he first encountered Matthew de Clermont, his sire.

While Phoebe is secreted away, Marcus relives his own journey from the battlefields of the American Revolutionary War, through the treachery of the French Revolution to a bloody finale in New Orleans. His belief in liberty, equality and brotherhood challenged at every stage by the patriarchy of the de Clermonts.

What will he and Phoebe discover in one another when they are finally reunited at Les Revenants, beneath the watchful gaze of Matthew and his wife, Diana Bishop?

Time's Convert by Deborah Harkness
My rating: 5 of 5 stars

This story is the first book in an off-shoot of the All Souls Trilogy. I loved it!

I downloaded this book in both the Kindle and audiobook formats, as this gave me the option to either read or listen to it. Saskia Maarlveld narrates the audiobook. Her voice and pacing are excellent, and I enjoyed listening to her bring the characters to life. I would consider listening to other books read by her in the future.

This story is an addition to the All Souls world created by Deborah Harkness and follows the life, death, and rebirth of Marcus Whitmore on the eve of Phoebe's transformation into a vampire. The book, told through several points of view, mostly Marcus's, Diana's and Phoebe's, takes the reader on a journey of endings and new beginnings.

Several characters from the All Souls world make an appearance; Matthew, Diana, their twins, Phillipe and Rebecca, Isabeau, Marthe, Miriam, Phoebe, and Marcus (to name a few). I also enjoyed meeting Freya, one of Phillipe's daughters. She plays a crucial role in the tale as Phoebe's guide through her transformation from human to vampire.

While Phoebe adjusts to her new life as a vampire in today's world, Marcus takes us back in time to his life during the American Revolution and his transformation at the hands of Matthew into the vampire he is today. I became so absorbed in the tale that it felt like I walked alongside the characters, watching events unfold. Not being an American, I am fascinated by the history of that country and the people in it, as well as the country it is today. The author, being a historian, has brought the past to life for me and I am grateful to her for the peek into a bygone era. Marcus's life is not an easy one and contrasts with Phoebe's upbringing. However, these two characters have love on their side, and I enjoyed watching their relationship develop and deepen as the story unfolded.

I reached the end of the book with mixed emotions; sad that the book ended, but glad at how it ended. I am now looking forward to reading more books from the All Souls universe, as there are more than a few characters I would like to know more about next.

Deborah Harkness has written a fantastic tale in the All Souls universe. She has created a world where humans, witches, daemons and vampires all live in an uneasy alliance. I love her writing style, which is fast-paced and exciting, and the story flowed beautifully!
I am looking forward to reading more of her books in the future.

I highly recommend this book if you love your stories to be full of witches, daemons and vampires, or if you love paranormal romance or urban fantasy genres. - Lynn Worton

Deborah Harkness is a professor of history at the University of Southern California. She has received Fullbright, Guggenheim, and National Humanities Center fellowships, and her most recent scholarly work is The Jewel House: Elizabethan London and the Scientific Revolution. She also writes an award-winning wine blog.
Posted by Lynn Worton at 02:00 No comments: