I am so excited to bring you this news! Here is the cover, title and blurb reveal for #DiannaHardy's new series, Blood Shadows. I've got butterflies and chills! I can't wait to read it! 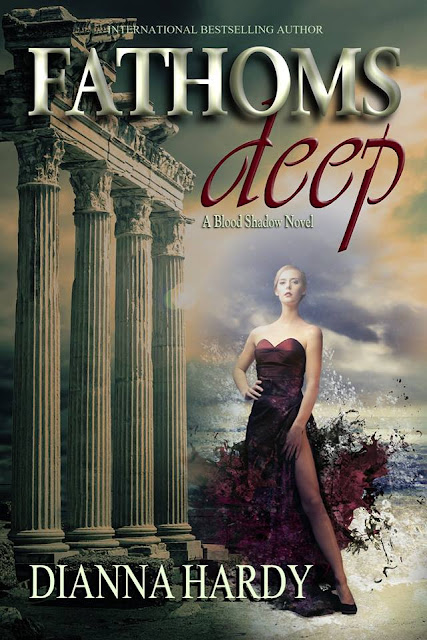 Amid the white-washed houses that decorate the beautiful island of Santorini, Greece, lies an ancient secret that will pull Laura and Roman fathoms deep into an atrocity obscured by mythology, and buried by aristocracy...

Laura is half-werewolf and half-siren, made 'siren' accidentally by the human male who saved her life five years ago with his breath of life - his siren breath.

Roman Dalton is human, and the only known male to carry the siren gene. Although he cannot fully form into his aquatic counterpart, he suffers the torturous effects of his compromised DNA every full moon when the tides are high - effects which have been steadily growing worse.

Posing as man and wife, and battling their own villainous shadows from a past best left drowned, the reluctant couple find themselves in Santorini, about to embark on a deadly mission to uncover more about the elusive siren in the hopes of finding a cure. For Roman was never meant to carry the siren gene, and certainly never meant to pass it on to a she-wolf.

Their answers might dwell among the vegetation of the monastic Mount Athos...

But there are people - very important people - who would rather some secrets remain hidden forever.


Author's note: I am estimating there will be two or three full-length novels in this series. Pre-orders for Fathoms Deep will be exclusively from iBooks and Nook, with Kindle pre-orders available from end of June, 2019. Pre-order links will be posted on Facebook within 48 hours, will go out in my website news email, and also in one more impromptu Release Day (Pre-order Day) Newsletter.

This will be a dark paranormal / urban fantasy series with a lot of suspense, and featuring a reluctant, antagonistic duo, both of whom have a lot of issues to work through. (Will contain adult themes and scenes.)

I can't wait to bring you Fathoms Deep!

All further info in the coming weeks can be found here: https://www.diannahardy.com/bloodshadowseries.html 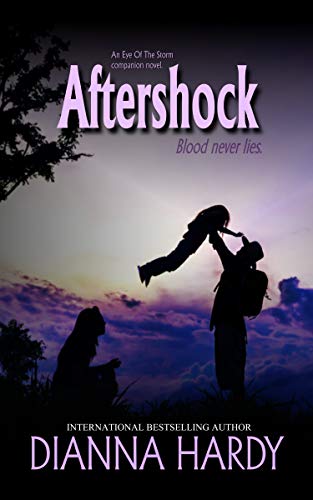 Aftershock is a companion novel to the Eye of the Storm series and also acts as a PREQUEL to a brand new series to come. You don't have to read Eye of the Storm to enjoy this novel (some background is given). However, we always recommend you do in order to gain full understanding of how the characters have arrived at this point.

Self-sufficient and travellers at heart, Pete and Claire packed bags five years ago and headed on a journey that would change their lives forever.

After the unexpected death of her childhood best friend, Sarah, Claire has nurtured both an open wound, and Sarah's baby - a miracle born on her deathbed.

Pete has been nothing short of a father to baby Jasmine, and partner to Claire, the werewolf in him one of the few things in the world Claire connects with.

However, despite their love for their adopted daughter and each other, fate's about to test the foundation they've built. Jasmine has been having episodes - seizures - the doctors aren't sure exactly what they are, or what triggers their onset, but when a little boy is hurt by Jasmine's hand they can no longer wait for answers. They consider taking to the road once more believing a life of travel might be safer than planting roots.

But there's a Supermoon coming - the first in thirty years - and with it, a total lunar eclipse. Pete can feel the charge in the air, and it seems, so too, can Jasmine. With her terrible, secret legacy threatening to break through the shadows, Pete and Claire have a devastating reality to face.

Can you ever escape what you truly are?

NOTES: This is a dark paranormal fantasy novel. Contains some explicit scenes. Written in British English.

Aftershock: an Eye of the Storm Companion Novel by Dianna Hardy
My rating: 5 of 5 stars

Claire (aka Beth from the Eye of the Storm series) now has a new identity. I loved her as Beth, but I think I love her more as Claire. She loved her best friend, Sarah. But when she died in a car accident while pregnant, Claire takes responsibility for her baby. Running for their lives from the danger of exposure from their daughter's unusual birth, Claire and Peter will do anything to protect their new family.

Jasmine is a lovely character. She is only two and a half when she's first introduced in this story, but she stole my heart. I love her innocence and curiosity. Even at that tender age, she has an unusual power. The story skips time, and we get to meet her once more when she is a five-year-old, and a Supermoon is imminent. As the event fast approaches, danger threatens, and their lives hang in the balance.

I have been eagerly awaiting the release of this book for some time. Told through the eyes of several of the characters, namely, Claire, Peter, and Jasmine, we get to see their thoughts and feelings.

I don't know how to put into words the emotions that went through me while reading this book. For someone who has written many reviews, that is not an easy thing to admit. I found myself smiling at the first scene where Jasmine appears; it was so sweet. However, as the story took me deeper and deeper into its pages, I ran a whole gamut of emotions, from happiness to anger, fear to heart-wrenching sadness. The characters came alive on the page, and I felt every emotion they did. There are some scenes in this book between Pete and Claire that are a little steamy, but amusing. They weren't particularly funny, but the situation of having a young child interrupting was. I think all parents have had to deal with this particular circumstance at one time or another.

A new character introduced into the tale never has his origins properly revealed, so he remains a mystery, though there is a twist I didn't see until I stumbled over it. I had my suspicions, of course, but even then, the reveal surprised me. One thing that did surprise me was Claire’s intuition. Was it an innately human sense, or does she had magic running through her veins? Diego is one of Jasmine’s classmates. There is one scene in this book that ripped my heart out containing him. I won't say what happened because of spoilers. Suffice it to say, keep a tissue handy, you'll need it. I reached the end of the book, and I've now got a severe case of 'book hangover' from reading this tale. Be warned!

As this series is a convergence of two other series - The Eye of the Storm, and The Witching Pen - I loved meeting Pueblo (from The Sands of Time - The Witching Pen Series) once more, as well as Jarrod. Near the end of the book, we get to meet the werewolves from the Eye of the Storm series (and their children), as well as Selena aka Jennifer aka Laura from Blood Shadow, the first book in this companion series. I now can't wait to read the two new series. One following Laura in the Blood Shadow series, and the other following Jasmine in the Aftershock one. Bring it on!

Dianna Hardy is one of my favourite romance authors (she writes both paranormal/urban fantasy and contemporary romance), she has a way of expressing so much emotion through her written words. Ripping your heart out with them, but will also fill you up with them too. I love her writing style, which is fast paced and exciting. The flow is fantastic too. Reading her books are a joy, and I will continue to read them for as long as she keeps writing them.

Unlike other books by this author, this book doesn't have many romantic scenes of explicit content, though what scenes there are, aren't as detailed as other series written by her. However, some scenes contain bad language and violence that may offend or upset some readers, so I do not recommend this book for younger readers or those of a nervous disposition. I highly recommend this book (and series) if you love contemporary or paranormal romances, dark fantasy and urban fantasy genres. - Lynn Worton 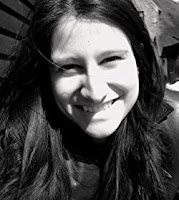 "Whether paranormal or contemporary, the one thing all my stories have in common is the fight for what you really want from life." (Dianna Hardy)

Dianna Hardy is a UK-based, international bestselling author of The Witching Pen series, and the Eye Of The Storm series. She combines a titillating mix of contemporary and paranormal romance, as well as urban and dark fantasy, into her writing, to bring you stories that are action-packed, fast-paced and not short of heat, with the focus on both character development and the plot. She writes full-length novels and short fiction. She has also written poetry (first published in 1997) and esoteric books and articles. Nowadays, she chooses to concentrate on writing fiction.

In December 2012, Releasing The Wolf hit the Kindle Paranormal Fantasy charts in both the US and the UK, where it stayed for three months, enjoying a highest ranking of #20. The first two books in the Eye of The Storm series have enjoyed success in the top 100 of Fantasy charts on Kindle US and Kindle UK, and all books in the series to date have reached the top 100 of the Fantasy iTunes charts in Netherlands, Norway, Australia and the UK, with Heart Of The Wolf (book 3) reaching #1 in Denmark.

The Witching Pen series, 'Til Death Do Us Part and A Silver Kiss, have also hit the top 100 of Kindle and iBooks charts (Fantasy, Romance and Horror) in a number of different countries worldwide.

Although quite active online, Dianna prefers the quiet company of nature and animals to the hustle and bustle of people. She loves anything paranormal (she doesn't really consider it "para"), organic food, walking barefoot, the smell of the woods after rain, and summer days.

However, she is also sustained by coffee, chocolate and the occasional vodka.

Having graduated from Richmond Drama School (London) in '98, she spent the next few years in a multitude of jobs (both acting and non-acting), studying anything that fascinated her, searching her soul, and finally found her passion where it had always been: at the end of a pen.

She currently lives in South Hampshire, UK with her partner and their daughter, where she writes full-time.

(Profile photographs courtesy of Alastair Hay)
Posted by Lynn Worton at 02:00 No comments: