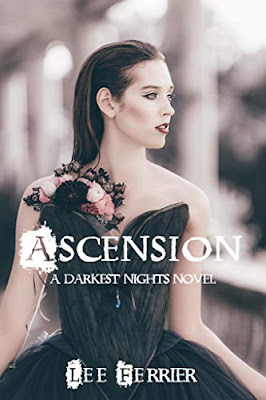 Lucy Beaumont is dead; but in a world of Gods and Monsters, death isn't the end. Passing over into the afterlife, Lucy soon finds out that she and her friends are part of something bigger than any of them could imagine. The legendary Crystal Wand can help Lucy in her mission to find a way back to the world of the living, but only if she can fix her incomplete soul and regain her missing memories...

Ascension: A Darkest Nights Novel by Lee Ferrier
My rating: 4 of 5 stars

Ascension is a bridging novel between Darkest Nights - Awakening and the next book in the series. I guess you can call it Book 1.5 in the series.

Disclaimer: I had the great honour of being one of the first people to read this book in its raw form while editing it. This review is my own honest opinion, and I have not received remuneration for it. I pre-ordered a copy of this book as soon as I heard it was available with my own money and read it in my own time. The author did not influence me or my opinion.

Ascension follows Lucy Beaumont's journey into the afterlife and told through her point of view. I am glad the author decided to write this story as I was so upset with him for *spoiler alert for those who haven't read Darkest Nights - Awakening yet* killing her off. I felt Lucy was a fantastic character and her shocking death affected me badly. It felt like I had lost a friend, and my heart had shattered.

Ascension sees Lucy coming to grips with her altered reality. She discovers that she is crucial to the fight between good and evil, and is the Dark Totem in a triumvirate destined to defeat an incarnation of the devil. As she struggles with her new powers, her personal life also takes a surprising turn. The reader gets introduced to new and old characters. It was a pleasure to see how Lucy's and Peter's friendship developed, as well as her interaction with the angel, Gabriel, and her girlfriend, Jordana.

This story took me on a roller coaster ride of emotion from beginning to end, which does end in a small cliffhanger, but this just made me want to read the next book as soon as possible.
Please note: This book is written in British English, so some terms and spellings may confuse American readers.

Lee Ferrier has written a fantastic YA dark fantasy/horror story. I love his fast-paced writing style, and the flow was excellent. This is an author who is not afraid to tread into dark places and kill off characters. In this respect, he is similar to George R.R. Martin (so I have heard, as I haven't read his books yet). This is one British author whose career I will follow with interest and would definitely read more books written by him in the future.

There are some scenes of violence (fighting and/or bloodshed) and, on occasion, gore that may upset sensitive readers. There is also mention of sex (F/F), implied in some scenes and explicitly shown in others. Therefore, I do not recommend this book to those who would be upset by this. However, I highly recommend this book to teens aged 15/16 upwards and those adults who love dark young adult supernatural/paranormal horror novels. - Lynn Worton 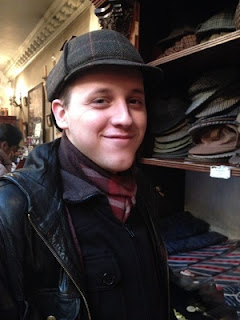 London based urban fantasy writer. Loves Japanese anime and blue hedgehogs. Lifelong goal: to own a husky...and a life-sized Dalek named Jeff. Currently have twenty-one stories stored away in my Mind Palace and will eventually get round to writing them all. Favourite colour: blue. Scared of circus folk. Fan of cheese and noodles. Can't live without my notebook and laptop.