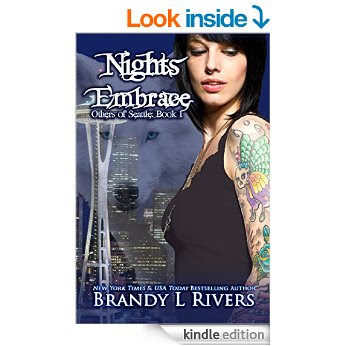 It all started with a song.

Roxana Nights was late to another gig, thanks to her first love, and drummer. It’s been years since she left Jordan, but he won’t let her go. Then she hears a voice that pulls her under a spell and changes her whole world.

Trevor Malone just moved to Seattle with his band. Music is his only passion, until he lays eyes on Roxana. He’s never felt anything as strong as the pull to her. Now he needs to find a way to introduce her to his world.

There’s only one problem. A rival clan won’t rest until they’ve taken Trevor’s down. Unwilling to let old grudges die, they target Roxy. Trevor will do anything to keep her safe.

Roxy learns that the world she writes is closer to reality than she ever imagined, and that not all monsters are evil, though some are ruthless.

Will love stay strong when the past comes out? Can they survive the centuries old vendetta?

Nights Embrace by Brandy L. Rivers
My rating: 4 of 5 stars

I received a complimentary audiobook code from the author in return for an honest review.

This is the first book in the Others of Seattle series. I really enjoyed it!

Roxana (Roxy) Nights is a really strong character. I liked her kick ass attitude. She is a fantasy author and the lead singer in a group which is called 'Nights Embrace', which also contains her brother Michael (Mikey) and her ex-boyfriend, Jordan. Running late to a gig, Roxy meets Trevor Malone and sparks fly.

Trevor Malone is a wonderful character, who also happens to be a werewolf and the lead singer for 'Lunar Storm'. However, I didn't get an Alpha vibe from him. To me, he's more the lone wolf type, who surrounds himself with misfits as friends; this is not a bad thing, just different to what I was expecting. Other readers may disagree. When he spies Roxy backstage, he's attracted to her, but worried how she will react to his secret. However, danger lurks in the shadows. Can Trevor keep Roxy safe?

This audio book is narrated by John Lane, who did a wonderful job bringing the characters to life. I love his clear narration and especially his Irish accent used for Trevor and the other werewolves in the pack.

Having previously read/listened to a few of the Others of Edenton series of books, I was looking forward to listening to this new series (at least to me). I started to listen and I was completely hooked from the first chapter. The story is told through the view points of Roxy and Trevor, but there are a few other characters who have their say. This story is just as fast paced as the first series, Others of Edenton, with several intriguing characters.
Roxy finds out secrets about herself, her brother and her life that completely shocks her, and it was a pleasure watching her deal with her new reality with more maturity than even I would have shown if I was in her shoes. Speaking of maturity or lack of, Jordan comes across as a juvenile jerk, but he does some growing up in this book. His attitude did make me want to bop him one, but he goes through something that changes him. For the better? I hope so. I'm looking forward to find that out.
Mikey is a wonderful character. He is kind and loving and doesn't deserve to have his heart broken by Isadora, but he's in love with her. I'm looking forward to reading his story too.

There are several surprising twists that I didn't see coming and danger lurks in the corners. This story took me on a roller coaster ride of emotion, with lots of danger and action. I loved how the final showdown between William Scarsborough unfolded. It was extremely exciting and it had me sitting on the edge of my seat, though I shed a few tears too. The ending left me looking forward to continuing the series and will read or listen to the next book in the series, Storm Mistress, as soon as possible.

Brandy L. Rivers has written another intriguing paranormal romance series. I loved her fast paced writing style, and the flow was wonderful. Her characters are lifelike and likable. She is now one of my favourite authors. 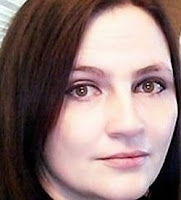 I've always loved books, especially about monsters and magic, so I started writing. I'm working on a prequel and the next few books in the Others of Edenton series, and I have a head full of stories to share.

I'm a stay at home mother with a wonderful husband who lets me write and write to my hearts content.

For more about me and my books, please visit: