I am thrilled to bring you the book tour of Just Shelby, the new book by author Brooklyn James. 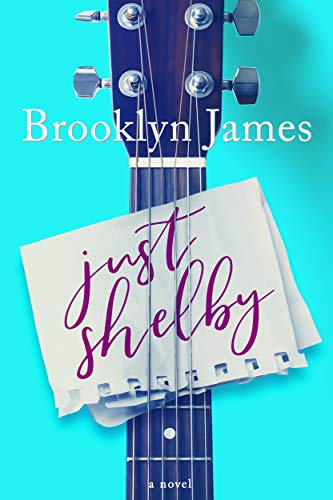 Book Title: Just Shelby
Genre: YA Romance
Pages: 301
Author: Brooklyn James
Date Published: 27 October 2020
Synopsis:
A secret note square found in a handmade guitar proves that small-town gossip is not only ubiquitous but occasionally true. This gossip comes with strings rivaling those on Ace Cooper’s guitar, the safest strings he will ever have around his heart.

Ace’s father warns him to stay away from the Lynn girl. Daughter of a deceased bootlegger and a barely living addict, Shelby Lynn is no stranger to small-town contempt. She keeps her nose in the books and feet to the ground, a college scholarship the only escape from her tumultuous life.

As Ace’s heartstrings unravel, so does his family’s role in Shelby’s broken past. Thrust into a precarious journey of their roots brimming with music and betrayal, the two have never been closer…to the truth of how Shelby’s father died. One truth transforms every facet of their lives forever.

A dual POV friends-to-first-love story, Just Shelby is an unsuspecting mystery that depicts how growing together can sometimes hurt worse than growing apart.
My Review:

Just Shelby by Brooklyn James
My rating: 5 of 5 stars

Just Shelby is a young adult, coming of age tale that takes the reader on an emotional journey.

Shelby Lynn is a wonderful character. I liked her a lot. She is the daughter of a deceased bootlegger father and a drug addict mother. She faces challenges that most people struggle with - peer pressure, small-town gossip and job prospects that are rather lacking. However, she has plans, big ones, to get a running scholarship and go to college so that she can escape from the judgement of the townsfolk. Her one saving grace is her friendship with Ace.

Ace Cooper is a fantastic character. I loved him too. He works in the mine with his father, but would much rather play music. When an opportunity to own a guitar belonging to one of the members of a band that once lived in the town appears, Ace takes it, little realising the secrets the guitar holds.

I enjoy a story where the protagonist grows, and this story both of them do. I love the chemistry these two have. Not fiery passion, but love that grew from a shared history, including the sole incubator (which they called the box) in the hospital when they were born on the same day. It came as no surprise to me that I fell in love with these two. They are the boy and girl next door, with family issues and day to day worries.

I knew going in that this book would take me on an emotional roller coaster, as I've previously read a few other books by this author. My only regret is that the book ended. The difficulty is trying to write a review without giving too much away, though I want to know more about what happened to Shelby and Ace, and whether they managed to find the happiness they wanted with their chosen paths. However, I can say that this story is incredibly touching, with surprising twists that had me gasping in shock, laughing and or crying, depending on the situation. The mystery surrounding the death of Shelby's father is revealed, and the culprit is a surprise.

Brooklyn James has written a story that touched me deeply. I love her fast-paced writing style, and the flow is wonderful. I am now looking forward to reading more of her books as soon as I can.

Due to the mention of drug abuse, I do not recommend this book to younger readers under 13, or those of a sensitive nature due to triggering. However, I highly recommend this book if you love older YA, Coming of Age and Romance genres. - Lynn Worton

Brooklyn James is an author/singer-songwriter inspired by life in the Live Music Capital of Austin, Texas. Her first novel, The Boots My Mother Gave Me, has an original music soundtrack and was chosen as a Quarter-Finalist in the Amazon Breakthrough Novel Awards. The book provided a platform where it was her honour to serve as a guest speaker with a focus on awareness and prevention of domestic violence and suicide.

When she is not writing books, she can be found playing live music around Austin as part of an acoustic duo. Moonlighting occasionally in voice-over and film, she played a Paramedic in a Weezer video, met Harry Connick Jr. as an extra on the set of When Angels Sing, appeared in Richard Linklater's Boyhood for all of a nanosecond and was a stand-in and stunt double for Mira Sorvino on Jerry Bruckheimer's Trooper pilot for TNT. Although reading, dancing, working out, and a good glass of kombucha get her pretty excited, she finds most thrilling the privilege of being a mother to two illuminating little souls and a wife to the one big soul from whom they get their light.

Brooklyn holds an M.A. in Communication and a B.S. in both Nursing and Animal Science. Her nursing career has seen specialities in the areas of Intensive Care and Postpartum. With the publication of her birth memoir, she is available for speaking engagements, readings, signings, and writing workshops on how to put pen to paper composing one's own birth story.
Author Links:
Website ; Amazon Author Page ; Goodreads ; Facebook ; Twitter
Posted by Lynn Worton at 12:00