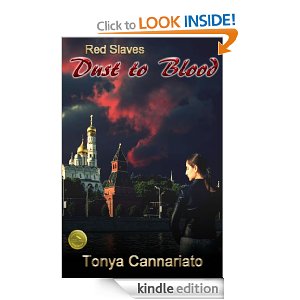 It's a simple formula: Magical power equals political power...Sparks are flying between researcher Anne Crosby and no less than nine men--but it's not what you think. Whenever these nine amnesiacs touch anyone, electrical mayhem results. More surprising: all of them have dust instead of blood in their veins, even though they're quite alive. It's Anne's job to track down who and what these men are, even though she takes a dim view of the supernatural.

Her research takes Anne to Russia and the discovery of the devastating magical source behind the former Soviet Union's power--a source the resurrected KGB wants back. Anne must stop them, and they'll do anything to stop her.

Dust to Blood by Tonya Cannariato
My rating: 4 of 5 stars

I received a copy of this book from the author in return for an honest review.

This was an exciting and intriguing read! I really enjoyed it!

Anne Crosby is a fantastic character. I liked her very much. She is a no nonsense, cynical person, who is methodical and thorough in her approach to her job. However, when her boss sends her to Russia to investigate a strange phenomenon, little does she know what awaits her.

I wasn't sure what to expect when I started reading this book, but I was completely sucked in from the first page! There is a lot of mystery and suspense that kept me turning the pages. The story is told from Anne's point of view, and I loved how the author set this book in Russia. Her description of the environs were exceedingly detailed; I felt like I was actually there! I liked meeting the nine men, who shared three names between them: Ivan, Vasily and Fyodor; They are a complete mystery, but compelling. There are also some other great characters that kept the story interesting. Igor Straslavski is a Russian businessman, and associate of Anne's boss. I liked him very much; he's extremely paranoid, but it is justified! Olga is a librarian and an ex-KGB trainee, but I really liked her. Natasha is a witch, but I was a bit ambivalent about her character. The ending has an intriguing twist that surprised me - "There be dragons in them there hills!". I just wish they had figured more prominently from the start!

Tonya Cannariato has written a thrilling and suspenseful paranormal fantasy that kept me on the edge of my seat.

I recommend this book if you love urban fantasy and/or paranormal genres, or books with witches and/or dragons in them! - Lynn Worton