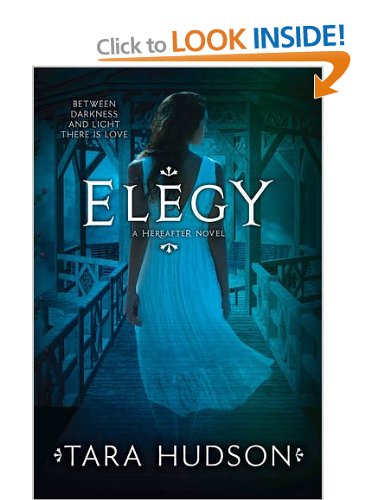 Synopsis:A stranded spirit, and a love story that crosses the divide between the living and the dead…Despite everything she's lost in the last few months, Amelia's new half-life feels something like a victory. That is, until the demons of High Bridge make their ultimate move: rising from Hell and killing Wilburton's residents, one by one, to get to Amelia.

When the death toll reaches too close to home, Amelia must make a horrible choice. Does she rely on the help of Joshua and his friends, or does she sacrifice herself… for the final time?

Elegy by Tara Hudson
My rating: 5 of 5 stars

This is the third and final book in the Hereafter Trilogy. I absolutely LOVED it!

Amelia Ashley is a fantastic character. I liked her from the first time I met her in Hereafter. No longer a ghost, but not quite alive either, she is Risen. She is still very powerful, but being risen has created a problem. Amelia can no longer touch her living boyfriend, Joshua. She will need all her strength to face what's coming!

Joshua Mayhew is also a fantastic character. He may be a bit of a sports jock, but he is also one of the nicest people I have ever met in a book! Thanks to a near death experience, he has the ability to see, touch and speak to ghosts. He is also madly in love with Amelia. (Darn!).

I love this series, so when the book became available to pre-order, I did so! I received it over the weekend and promptly began reading! Once again, I was pulled into Amelia and Joshua's love story! I didn't put this book down until I had read it from cover to cover! In fact, I read this book within 7 hours! The love story between Amelia and Joshua really tugged at my heart strings! I found myself tearing up a few times! However, there is a lot of danger in the form of the Demons living under Wilburton's High Bridge. They are extremely determined to get Amelia, and use any means to do so, including killing the residents of Wilburton. They are very unsavoury characters, and they made me shudder with revulsion!
Amelia has to make a difficult choice, and I don't envy her it!
I found the ending bittersweet in many ways, but I will leave it to you to decide if you agree or not!

Tara Hudson is a wonderful author! Her characters are extremely lifelike and her descriptions of places are very vivid. To say that she is a relative newcomer to the literary world, she makes it seem as if she has been writing for years! Her writing is fast paced, and flows beautifully! I am a HUGE fan of hers, and will read any books written by her in the future.

I HIGHLY recommend this book (and series) if you love YA, Romance or Paranormal Romance genres. - Lynn Worton